It used to be that photographers were crippled. That is, they couldn’t or didn’t do thoroughgoing postprocessing. Some photographers had an impoverished darkroom in their closet, a half measure. Others had a studio darkroom that provided a broader range of image manipulation but not the robust facility of a commercial photo lab. Many photographers left postprocessing to photo labs, and the best labs were ones that did the best job of catering to the whims of good photographers. But catering and doing it oneself are decidedly different activities. And the chemical process itself is severely limited not only in scope but by the huge amount of time and expense involved. Consequently, postprocessing in the film days was despair for most and at best an arduous opportunity for just a few.

Although that was true for black and white, it was also typical of color postprocessing but more so. More variables, more chemicals, more equipment, more technology, more of everything. It was, indeed, overwhelming. It was a hemisphere seldom emancipated from its severe chemical limitations.

Adobe Photoshop is the half-million-dollar darkroom we never had. But it’s more. It’s a darkroom unchained from the limitations of the film era. The good news is that it’s dirt cheap, much faster, much more convenient, and with a robust capability unimagined before the digital age. The dark side is that it has a steep and inconvenient learning curve. It’s not for the lazy. It’s for the complete photographer. 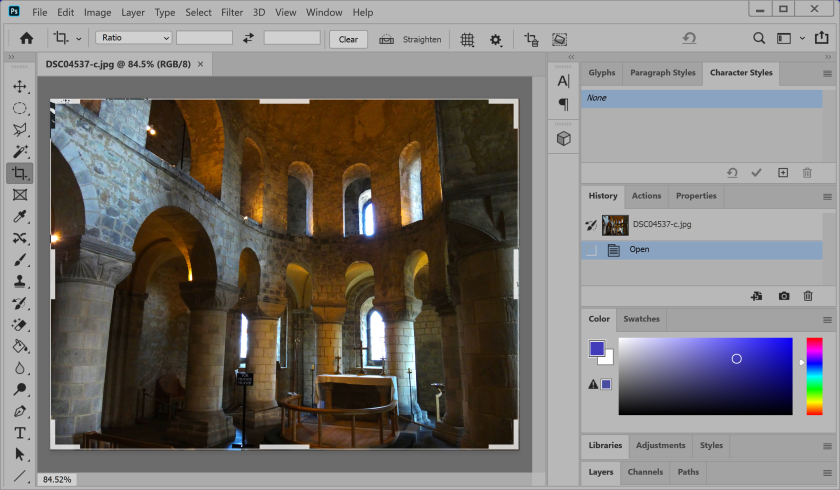 By “Photoshop,” I mean any one of the categories of full-bodied photo processing software now available to everyone, such as Lightroom, Corel, DxO, Phase One, etc. And, of course, Photoshop itself. No messy, expensive, lung-mauling, eye-maiming chemicals. Instead, instant results all in the space of a computer, anywhere. It’s hard to imagine going from such an archaically inconvenient system to such an insanely convenient one. But it has happened. Isn’t it bizarre that photographers bitch and moan about paying $9/month for Photoshop when their film/processing/chemical expenses per month during the film era might have been ten or fifty or a hundred times as much.

Ah, but it’s the learning curve. Photoshop is too difficult to learn. One doesn’t need all that capability. One can get by with Microsoft Paint, which is free. Swinewash! In one Photoshop community college course, you can learn to do more postprocessing than Ansel Adams ever dreamed. And why wouldn’t you?

Of course, there’s nothing wrong with getting the best possible photo you can in the first place. We spent hundreds or even thousands on equipment to do so. And postprocessing can’t turn a lousy photo into an acceptable one. But there are so many ways to take a photo inadvertently imperfect, even if slightly so, that postprocessing is valuable for almost every shot you’ll ever take. And for many shots, it’s the difference between life and death (of the photograph, not the photographer). Thus, in the digital age, Photoshop has become essential to be a proficient postprocessor. No excuses. No half-baked software. No shirking widely available training. It’s what you do as a photographer.

The difference between the very good and excellence in almost every human activity is marginal. That is, it’s the result of the little extra bit of talent and hard work that goes into the completion of a project or activity. For photographers, this means that knowing and using first-rate software for postprocessing is the edge that generates excellence. That assumes, of course, that one has done an excellent job of shooting the photos in the first place. But it’s hard to imagine an excellent photographer today who’s not an expert in using Photoshop. It’s inexpensive, and the training is no more demanding than a trade school or college course (for a solid postprocessing foundation).

But what about amateurs (enthusiasts), some of whom are more competent than career photographers? If amateurs do anything besides take snapshots, they invariably follow a commercial model or a fine art model in their photographic activities. Consequently, they are in the same boat as commercial and fine art photographers. They need to do their own postprocessing and use full-bodied photo editing software (e.g., Photoshop).

To reach your full potential as a photographer, you need to do your own postprocessing and do it in the most competent manner possible. The half-million-dollar darkroom is with us for the foreseeable future, and the savvy photographer will embrace it.

Photographer for 72 years. View all posts by Joseph T. Sinclair